THC extracted into an oil can be evaporated into a sticky goo or wax that is smoked or, more popularly, vaporised. That goo can be further refined into a hard glass-like substance often called “shatter.” 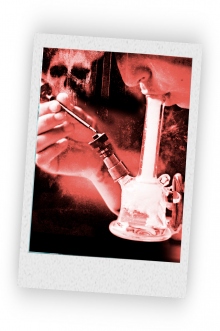 This concentrated form of marijuana is heated quickly on a very hot surface, vaporised, and then inhaled through a special apparatus, sometimes called a “dab rig” or an “oil rig.” This process is called dabbing.

THE EFFECTS OF DABBING

When a person inhales a concentrated “hit” through dabbing, the physical and mental effects that happen with smoking marijuana are intensified.

Users have reported that this form of marijuana can create psychotic breaks, hallucinations (seeing and hearing things that are not there), and having sensations like insects crawling under the skin.8

Because these concentrates are very strong, there have been repeated occasions when 911 teams had to be called due to cannabis overdoses.

Smoking tobacco and marijuana together in the bowl of a pipe is known as mooking. 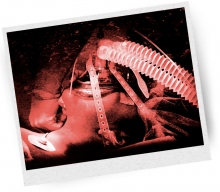 The chemicals of tobacco and marijuana work on the nervous system and affect both the mind and the body. Some of these effects cannot be reversed.9 Smoking has been known to cause end-stage lung disease requiring oxygen tubes 24 hours a day. When this occurs, a person is no longer able to carry out normal activity. Simple things like walking from the bedroom to the bathroom are nearly impossible due to severe shortness of breath.9

“I ended up in the mental hospital because it had been 10 days and I had gotten 10 to 15 hours of sleep total.”