Scout leaders and Rovers (senior Scouts age 17-25), trained as drug education lecturers, receive Truth About Drug materials to use in their troops, schools and communities.

Indonesia takes a no-mercy approach to drug trafficking: the death penalty. But that doesn’t stop young people from experimenting, and drug use among the nation’s youth is on the rise. With 50 addicts dying every day, the country’s president declared a state of emergency in regard to illicit drugs.

A leader among those recognizing education as the only sustainable solution to drug abuse is the Southeast Asian Coordinator of Foundation for a Drug-Free World, Gary Bromwell. He learned in 2006 that drug dealers stationed outside grade schools were giving children—some as young as 7—candy laced with drugs to get them hooked at an early age and make customers for life. As a father of three, he was outraged and terrified—and activated to do something about it.

Bromwell took on the Drug-Free World campaign with a vengeance, first introducing it to the education department of Yogyakarta City, the capital of Java. He trained 30 teachers from junior and high schools who in turn delivered the Truth About Drugs curriculum to 60,000 students in their classrooms.

To reach more of the 255 million people living in Indonesia—the world’s fourth most populous country—Bromwell saw to translation of the materials, including the full Truth About Drugs curriculum and the Truth About Drugs booklet series, into Bahasa Indonesian.

With the success of the teacher training and delivery in Yogyakarta and translated materials in hand, the Drug-Free World team took the program to the national level. They met with the Scouts’ National Head of Training and Education and forged a partnership with the National Scouting Association (Gerakan Pramuka), a pillar of Indonesian culture with 20 million Scouts and a presence in every Indonesian school—and more than half of all Scouts worldwide.

Bromwell and the Drug-Free World team started by training 30 Rover Scouts (senior Scouts 17 to 25), who in turn taught the Truth About Drugs to younger members. From there, word spread like wildfire, leading to a second partnership with the National Narcotics Board (Badan Narkotika Nasional—BNN) that requested the BNN logo to be placed on the Indonesian materials.

Bromwell and his Drug-Free World team returned to Indonesia again and again to train hundreds at every level of the Scouting movement, holding training seminars and educational workshops throughout the nation.

More than 4,000 teachers, Scout leaders and Scout Rovers have now been trained in the delivery of The Truth About Drugs materials, bringing drug education enlightenment to tens of thousands of students and Scouts across the country. 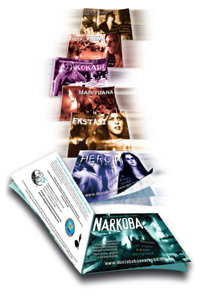 The Truth About Drugs
Translated into Bahasa Indonesian